My first blog post outlined how to deploy a static ClojureScript website to Github Pages. This is an excellent choice for personal websites, or an open source project's documentation because you get free hosting infrastructure with relatively little effort. Having said this, what happens if you can't use static hosting providers like Github Pages or Netlify? What if you need to control more of the hosting service? This post will show you how to deploy your ClojureScript site on a webserver you control. Specifically, we will cover the following topics:

By the time we are finished I hope to have clarified the general steps involved in hosting your own ClojureScript app (spoiler: it's the same as hosting a JavaScript app).

Beyond creating a simple ClojureScript app, this post is not really about ClojureScript. I see it's role as clearing up the process of deploying a static site. Specifically, we will focus on deploying ClojureScript to a webserver (Nginx). If you are following along, you can see the source code here.

In order to make our site available to the internet we need a physical webserver and software webserver. Once we have these, we just have to:

In order to do the above, we need to perform the following steps:

These steps are the same whether you are writing JavaScript, ClojureScript, Reason or any other web ready language.

In order to illustrate the deploy process we are going to:

We are using Nginx because as far as webservers go it's easy to setup, configure and find documentation for. Finally, because it's ready to use you can use this solution in your workplace today to quickly deploy static documentation or a prototype app.

If you are going to follow along with this post please make sure you have the following tools installed:

We will create our ClojureScript app using Create Reagent App. This is a tool which automatically builds a modern ClojureScript/Reagent (READ: React) app for us. All you need to do is move to a directory where you want your project to live and run the following command:

Once the above is complete you should have a project that looks like this:

This app comes with commands for running the app in dev and building a production version of the app. The commands are clj -M:dev and clj -M:prod respectively. Feel free to play with the app.

In this section, I want to spend some time making sure the lightbulbs are working before we decorate the tree. We are going to verify that we can use docker to pull and run an Nginx container locally. To begin, pull an nginx docker image into your local filesystem:

and if all went well we should see an Nginx image in your local filesystem like:

If that went well, we can try to run our nginx docker container

and once again we will verify that the container is running

and now you should be able to visit your docker container at http://localhost:80. This step was like checking that the all the lightbulbs work before you hang them on the tree. With this, we can go on to the meat and potatoes of the excercise. Before continuing on, be sure to stop your Nginx docker container:

If this worked, we are ready to deploy our site Nginx. What we are going to do is start by manually deploying our app so we can understand the manual steps and then automate things using docker (because we're lazy boys).

Before we continue, make sure you stop your Nginx docker container and remove it like so:

and let's start it again except this time we will start it on port 4001.

This section is about building production artifacts. To clear things up, when I say artifact I mean the code that will be run by our webserver. In the case of a web development project, the artifact will be the minified and dead code eliminated JavaScript produced by the ClojureScript compiler.

To create this artifact we have to tell the ClojureScript compiler to build it for us. We do this with the following command:

After the above command is run we can verify that we have a production artifact by looking into the out directory and finding a file called dev-main.js

If that has worked, we can move to the next step: putting our production artifacts on the physical webserver (docker container).

This step is about creating a place for our production artifacts to live. To do this, we are going to manually go inside our nginx container and create the folder structure.

From here, we just have to teach our webserver how to serve these files.

At this point we just have to configure our Nginx server to know where our production artifacts live. To do this, we have to remove the default Nginx configuration file and replace it with a new one.

Start by execing into the Nginx docker container:

Then exit out of the docker container. At this point, we want to create a custom configuration file called nginx.conf. This configuration file will live in the root of our ClojureScript app in a folder structure like tools/nginx/nginx.conf inside the root of our demo-clojurescript-nginx ClojureScript app. So go ahead and create the folder structure:

and then you can open nginx.conf and make it look like this:

Now we want give this nginx.conf file to our Nginx container so it knows how and where to serve our project from. To do this, run the following command:

and then we can start the container again.

Now we should be able to visit our site at http://localhost:4001 and see the following: 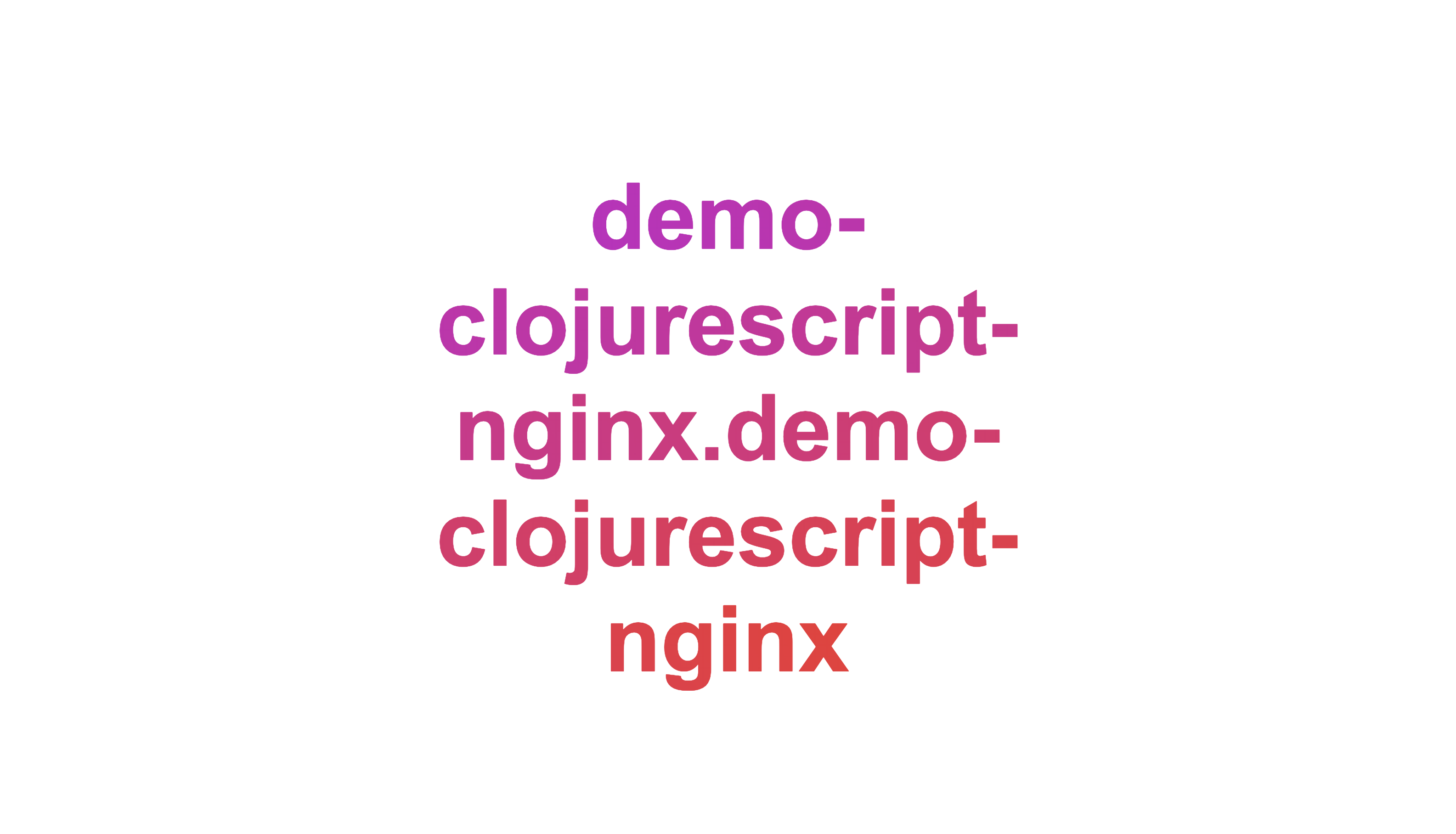 You may have noticed, but the above process is a manualy process. The point was to show you exactly what the process looks like if you have to manually run it. Now though, we want to show the automated flow using docker.

Go into the tools/nginx directory and create a file called Dockerfile.build and make it look like this:

In the above the goal is really to keep everything as light as possible. We just want Java so we can build our project and if you have to build anything with node you will have to also add that to the docker container. Stuff you might do with node? Build your style sheets? Run tests in a headless environment? etc. It's going to download eveything and then run the container.

A few things to note:

This docker file is responsible for building our artifacts that we performed in step 2 earlier. Now lets go ahead and move to the root of our project and run that dockerfile and see if everything works:

The above is going to build our image and the production clojurescript object. The next step is to run a container based off the above image so that we can get the production artifacts

If you curious about the content of your docker build container you can exec into it like this docker exec -it demo-clojurescript-nginx-build bash.

At this point, we want to copy the built files from the docker container to our local machine. If this were running in a CI/CD process we would have a special spot in the CI/CD environment for these temporary files. Because this is our local system, we have to create a temporary place for these things to live. Lets call this place temp/cljs-out and we will create it in the root of our demo-clojurescript-nginx repo.

from here we can grab the files from our Dockerfile.build container and move them to our temp dir like this:

Note that if you are running in CI/CD tool like circleci or travis or anything really the whole manual copy things over step does not have to be done because there is a temporary file system there where you can store things. In our case, we are setting this up to run locally so we will create a holding place in our repo which will act as this temporary file system.

The next step is automate step 3 from above: nginx configuration and moving the artifacts from the above to the nginx container. To do this, we need to build our own nginx container which is going to be the docker container you would actually run. SO go ahead and create another docker container inside of tools/nginx called Dockerfile which looks like this:

and before we run our final image stop any instances of Nginx docker containers you may still have running on port 4001. e.g.

and now we should be able to run our Nginx container

And with that we have successfully deployed our ClojureScript app to our own Nginx webserver. At this point, the next step is to deploy this on a server. Unfortunatley, that is out of the scope of this post, but if you are using a service like AWS or Google Cloud Platform they should have some awesome guides for deploying Nginx on their infrastructure.

Again, my hope is to outline a piece of the process. Let me know if this helped!